I4.0 / IIoT Programming with the “I4.0 Integration Suite”

Digitalization means: Elimination of manual work between IT and OT

Digitalization and Industry 4.0 are still handled far too abstractly today. Basically, it’s quite simple: Wherever manual intervention is still required today to allow one software to interact with another software, this has to be eliminated. Today, we still see this very often, especially in the interaction between the production level and IT. If these interfaces are automated, the knot is resolved as if by itself.

Data must be automatically written from IT to OT – and vice versa. Processes and IT applications can trigger functions that copy such data. These tasks are often still done manually today – and they need to be automated.

Protocols and interfaces, such as OPC UA, should be seen as tools. Digitization is when you start working with these tools. These tasks must be able to be handed over to a robot, i.e. they are programmed out.

But nobody thinks about that:

This digitalization will only be effective if the company really does become more flexible – in other words, can react faster to new requirements. If an external specialist is needed for every change in the machine park, automation or product range, things become much more complicated. And when things get complicated, at some point nothing works anymore. In this way, you achieve exactly the opposite of what you originally wanted. The company is not more flexible, but is in danger of freezing.

That´s why a tool is needed,

With such a software the automation professionals can do all the I4.0 and IIoT development by themselves. And wherever they are unknown, they could ask the IT developer to give them a function or API in their software that would allow them to read and write data from the respective IT application.

What is the I4.0 Integration Suite?

The “SpiderControl I4.0 Integration Suite” is a comprehensive low-code tool for developing solutions for integrating OT into IT. It consists of a powerful SCADA server and a simple browser-based FBD programming tool and is targeted at programmers from the PLC sector.

The SpiderControl SCADA Server contains all common drivers for communication with the control level and operation via standard HTML5 browser.

The SpiderControl HMI Editor allows easy design of HTML5 user interfaces, which are used for all UI tasks: SCADA control system, operator panels for local operation, remote access with the browser and visualization of KPI’s, alarm lists and trends.

The SpiderPLC starts and monitors script engines, such as NodeJS and Python, so that own scripts can be integrated and called via function block. 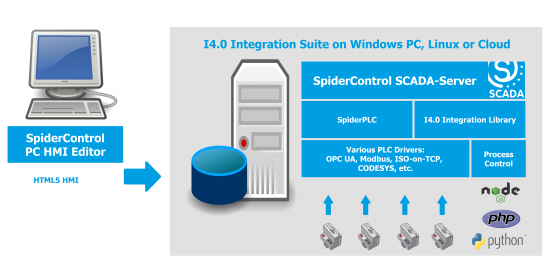 >> Test the I4.0 Integration Suite directly in the cloud

Available for many platforms

SpiderControl is available on all major operating systems. This enables you to use the same concepts and applications throughout your company.

I4.0 Integration Suite already pre-installed on the PiXtend Raspberry Pi

The I4.0 Integration Suite is a package pre-installed on PiXtend that provides an extensive library of functions for solving such tasks, so that people from the automation environment can implement and maintain these tasks themselves via a very simple browser-based function plan programming.

The setup presented here can be downloaded as a complete SD card image. By the way, all relevant components are already pre-installed on this image. There is no faster and easier way to an I4.0 project! And that: Exclusively with your own personnel! 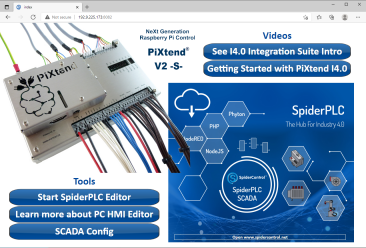 For free download the SCADA server with SpiderPLC is available here for PiXtend.

With SpiderControl a company can build up an I4.0 infrastructure – step by step – with the existing staff. The costs remain transparent and above all manageable. The risk of failure is much lower, because no large budgets for external specialists are necessary and undesirable developments can be recognized much faster.

Once the data has been captured and the functions are in place, the connection to the cloud is only a data module away.

With the “SpiderControl I4.0 Integration Suite”, Industrie 4.0 and IIot becomes a task that can be implemented – step by step – with the existing staff. The digital infrastructure is set up without any risk, at manageable, calculable costs, so that new business models can be tested and improved on the market step by step.

Data acquisition (BDE) and everything that goes with it, is more important today than ever. But many companies still shy away from opening up the production level to the Internet or storing their own operational data on a public cloud. There are certainly valid arguments to justify these approaches:

With a local cloud, companies can operate a server within their closed corporate network.

We will be happy to install a system that covers all your needs. And with the “I4.0 Integration Suite” you can automate many administrative tasks, such as backups.