Als Spider SCADA in the cloud, on PC or as embedded system

Visualization on a PLC is able to display local data from a PLC in the HMI. If you want to display variables from different PLC (or embedded systems) in the same HMI (for example, as an overview page), you need a SCADA server, which has various drivers to provide the desired data. Small control systems have geral a few hundred data points, while large control systems must record up to several tens of thousands of variables.

With its innovative Spider SCADA product, SpiderControlTM offers a quantum leap in design and operation. Five features, which are offered for the first time in a SCADA product, enable an unprecedented productivity boost in engineering.
With the SCADA product, iniNet Solutions is revolutionizing web visualization. Due to the new approach, the advantages for the user are enormous: the convergence of SPS Web-Visu and SCADA considerably simplifies engineering. The import of the Web visu as well as the trend and alarm logs from the PLC simplify or automate SCADA configuration.
Users also benefit from declining costs such as: low training costs, since only one tool for HMI & SCADA has yet to be used. Likewise, the engineering costs are reduced since the SCADA configuration is many times easier.
This revolutionary approach has ensured that SCADA received a top ten position at the Automation Award 2013!

Web-Visu import: Read from the control

The new Spider SCADA HMI Editor is able to read and convert web visualizations directly from the controller. The user only needs to specify the URL of the corresponding HMI project on the PLC, and the tool automatically imports the entire project, which is clearly displayed as thumbnails. From this selection, either entire pages can be inserted into a SCADA project or existing HMI objects can be reused in new pages by copy-paste. The user can not only maintain his existing investments, but also use them in other projects. Both Web Visu projects made with SpiderControlTM (or an OEM version thereof) can be imported as CoDeSys Web Visu projects (V2.x).

The new SCADA can now recognize a large number of common formats for alarm and trend recording on the PLC, which automatically centralize and record these at the push of a button. All information from the log record as well as the log files stored on the PLC are automatically transferred to the SCADA, which results in a considerable labor saving.

SpiderControlTM HMIs work as MicroBrowser as well as HTML5 clients without the programmer having to make any adjustments to his project. The MicroBrowser offers as an embedded client for such web visualizations a new approach: it is interpreted at a higher (semantic) level so that a virtual machine or a script interpreter is no longer necessary in the past. The Web Visu HMI runs instead on the MicroBrowser engine. The memory requirement is thereby reduced by factors and also the overhead generated by the script interpreter is completely avoided, which also increases the speed by a multiple. The MicroBrowser also has a strictly deterministic storage management, which in turn guarantees a very solid long-term stability. On this basis, an HMI engine can be programmed, which can be ported to virtually any operating system.
Advantage: Based on the MicroBrowser technology, industrial panels can be produced, which require considerably less resources and are thus considerably cheaper than comparable products. The stability and robustness of the MicroBrowser devices is based on the deterministic structure of the software and the use of long-term microcontrollers. 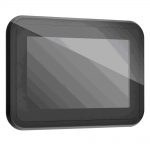 Two-way expandability with HTML5: no limits

The automatic generation of Web HMIs via a software API interface is used for particularly recurring tasks. With the code generator, the path to zero engineering is no longer far in the case of abstract project descriptions in a database or an Excel document.

The advantagel:
No other product covers even a broad range of runtime systems and offers this performance even in low cost embedded systems. Users benefit from a substantial cost savings in the hardware.
The new SCADA thus converts key words such as “mechatronic units”, “ubiquitous computing”, “distributed systems” or “automated engineering” into a tangible concept. This brings your productivity to a much higher level!

Revolution Pi is a new automation hardware based on the proven Raspberry reference design.

The innovative browser-based Spider Web-HMI editor from iniNet Solutions is now available as standard on the << Revolution Pi platform >> and is connected to the Soft-PLC Logi.cals. Users can directly develop a Web-HMI using standard browsers and easily display variables from the IEC61131 code of the Soft PLC.

Designing user interfaces is therefore very easy. A costly, external PC software is not required and at the same time excludes additional sources of error.
All HMI’s can be created directly in the field via tablet as well as Smartphone, extended or tailor-made to the respective application.

But that is just the beginning:
<<Revolution Pi>> is considered as a modular system for the development of IoT systems (Internet of Things) as well as modern automation components and is aimed at the << maker scene >>.

The Web-HMI editor as well as the familiar PC-based SpiderControlTM editor was developed by iniNet Solutins in such a way that each user can implement his own product individually. For example, appearance, functions and HMI objects can be adjusted arbitrarily and easily by a maker. Both tools are fully compatible. This gives the HMIs thus drawn a considerable added value and can profit from the entire SpiderControlTM system. This also means that the widely used MicroBrowser panels can be used as front-end, and HMIs can be portated between various control and PLC platforms. An important point for all users who want to react flexibly, quickly and cost-effectively to customer requirements and market changes in the future. 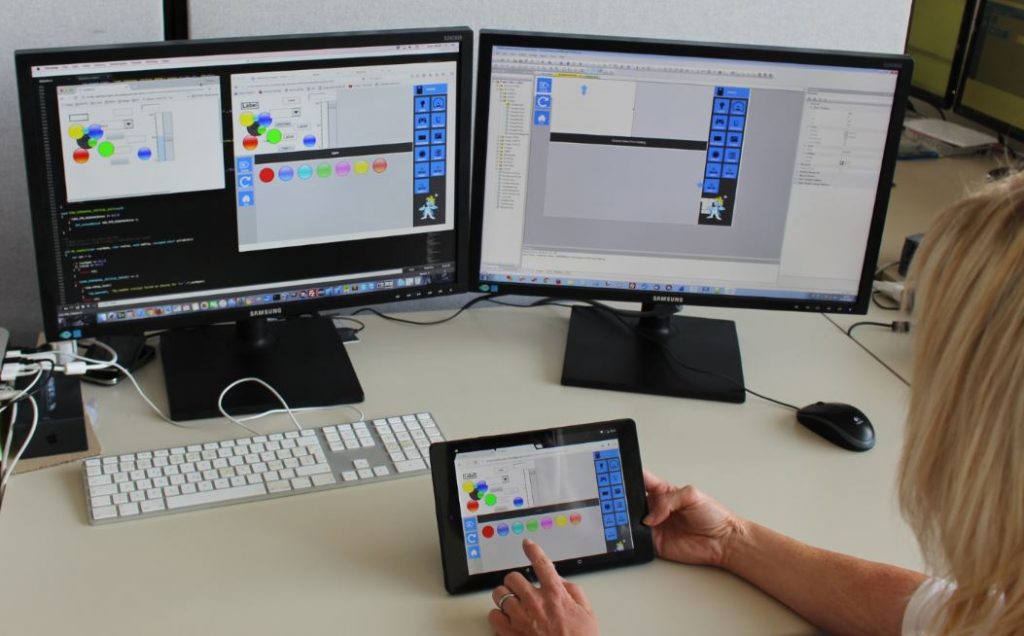 Do you want to use data from several PLCs in a HMI project, on a Web-Server on a PLC?
Should additional devices be connected via fieldbus protocol, such as Modbus, ISO-TCP or OPC?
Then simply use the Spider SCADA server, which is available on WinCE, WinXP / Win7 and also Linux. 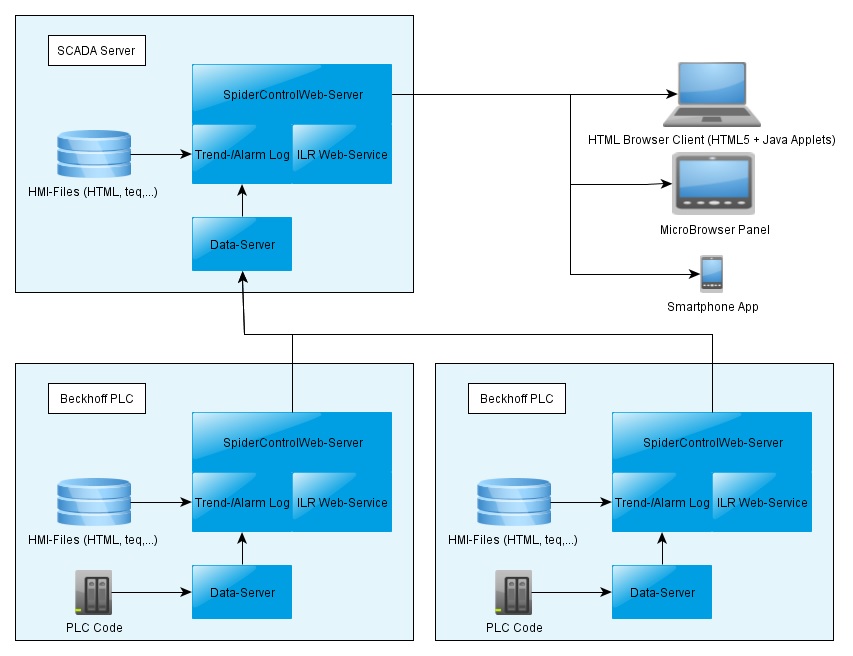 Spider SCADA-Server on operator panels with Linux or Android

Many industrial operator panels are now based on an embedded Linux or Android operating system. Since the processors on these devices are now quite powerful, we can also offer a SCADA server on such embedded systems with a flash file system. There are already a number of hardware manufacturers who offer such systems ‘off the shelf’. We will send you a list of possible suppliers.

Expand the SCADA Web-Server through a portable UserDLL!

The basic structure of the system is as follows:

The customer uses a standard board based on WinXP/7/8/10, WinCE/WEC or Linux, on which the software is installed. This software consits of the existing SpiderControlTM standard components: MicroBrowser and SCADA Web-Server. The HMI is drawn with the SpiderControlTM HMI Editor, the editor creates a web-project (HTML5), which is copied to the file system. The Web-Server is extended by a customer-specific data server, that means all project-specific functions are implemented (‘customer application’) in this module (in C/C++/C#).

The Web-Server already has an alarm / trend logger, which can perform long-term recordings. This logger is also configured with the HMI editor. The UserDLL can access all the internal resources of the Web-Server and is able to generate dynamic HMI pages, vector graphics and all types of data or objects as part of business logic.

The source code is written in the framework of this concept and can easily be ported from standard Windows 7/8/10 to WinCE (alias WEC) or Linux (as shared library). 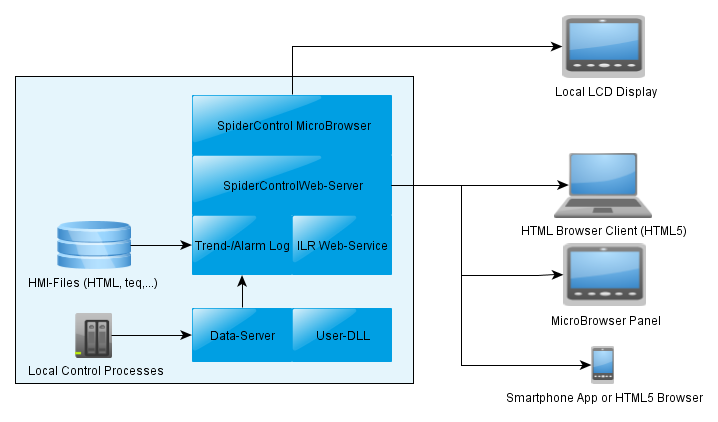